TeamAfrica: The Direct Continuation of All Africa Bible College (AABC).

TeamAfrica is rooted in the mission of the Apostolic Church, but is a partnership network for all Christian leaders, primarily in Africa. Several of those we work with today are former students from All Africa Bible College and Kaniki Bible College.

Apostolic church dates back to the beginning of 20th century when there was a great revival in South Wales, especially in the cole mines. - It was a strong outpouring of the Holy Spirit - almost same time as the events in Auzusa street in America. So we have comon roots with other pentecostal churches.

The revival from Wales spread into Europe. Denmark was one of the first countries where an Apostolic Church was founded. Right from the beginning there was a strong focus on global missions. 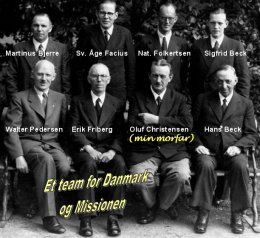 A vision for World Mission

The early leadership in denmark (in the middle is my Grandfather) sent missionaries all over the globe.

The mission to South Africa however was started by the British Apostolic Church but ran into difficulties in the apartheid years. - The British redrew and the Danish missionaries took over in the 1956.

Apostolic Church in South Africa was for a number of years lead by Missionary Harald Thorsen who also build a good number of the existing church halls.

The newly planted Apostolic Church in Southern Africa ACSA became autonomeus in the 70ties and in the 80ties the vision of a Bible College was strong.

It was also Ps. Thorsen that found the premises where All Africa Bible College was build.

The below links have more detail in Danish:

The commitment in South Africa started in 1959. The establishment of AABC was especially the main task for Kirsten and Erling Rasmussen, who were leaders of the school until 2002 when Peter and Karen Stochholm took over the responsibility.

The content of the school had at that time changed from being a 3-year basic program to being a 1-year bachelor module. (superstructure)

Karen and Peter Stochholm were managers of AABC until 2005 where the physical property has now been sold to another organization due to lack of funding from Denmark.

The name TeamAfrica was introduced when the physical property was sold to emphasize that the training business continued and that it would happen as teamwork in many places in Africa. It was Bible School on Wheels that brought the teaching to where the students were and where local leaders could be inspired to do good Bible teaching in their churches.

TeamAfrica's logo seeks to clarify part of the vision:

The background consists of Christian Schwartz's three-colored illustration that symbolizes the triune God.

On top of it is a sun, because it is light we want to spread in Africa. Furthermore, there is a clear cross to emphasize what is the source of the Gospel, namely the love of God and the sacrifice of Jesus. And in the very word 'team', the e-mail symbol is used to illustrate that the partnership will for the most part be via electronic media.

TeamAfrica is not primarily an organization, but a mission vision. It is about establishing cross-border cooperation; a collaboration to spread the good news and equip those who stand as leaders and teachers.

The registered name itself and everything that is published on our website and YouTube channel is owned 'owned' by Karen and Peter Stochholm, and as a mission project is part of the Apostolic Church Mission.

But the vision is 'owned' by everyone who shares this vision, and it gives them the right to use the name in their own context to the extent that they use our materials, and moreover, everyone has the opportunity to freely download, use and pass on our text files and PowerPoints.